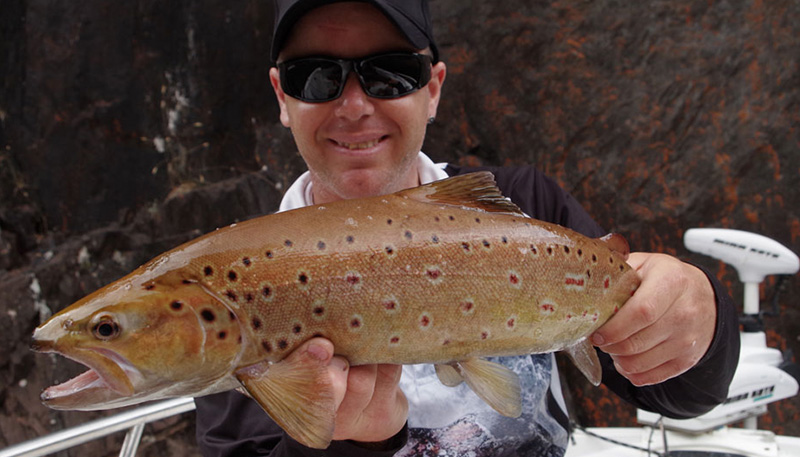 With trout season in full swing across southern Australia, Starlo offers a quick refresher course on the usefulness of Squidgies when it comes to catching these fish!

For the first decade of this new millennium, a huge portion of the Australian mainland was gripped by the worst drought of my lifetime. Its severity exceeded that of the significant dry spells I can vaguely remember as a kid, such as the big one in the late 1960s, as well as the much more recent and devastating drought of the early to mid 1990s. Both of those events were bad, but the decade of below-average rainfall we experienced through the “noughties” (2000 to 2010) helped to put all those others into perspective for what they really were: typical, cyclic dry spells. By contrast, the new millennium event was in a league of its own, and we may need to scour climate records all the way back to the closing years of the 1800s to find its equal. Hopefully, we’ll never see its like again in our lifetimes!

Along with agriculture and the economies of our inland towns, freshwater fishing on the mainland suffered a major body blow as a result of the incredible millennial dry. Nowhere was this more obvious than on the mainland trout waters of Victoria, NSW, South Australia and southern WA.

Some of the central-southern NSW streams around Goulburn and Crookwell where I honed my fly and lure fishing skills for trout during the 1980s and early ’90s actually disappeared completely in the big dry, while others were reduced to strings of warm, stagnant pools. Across the border in Victoria, the same story was repeated on an even larger and more widespread scale, with entire lakes (such as Toolondo, in the Wimmera) vanishing for a time.

Even Tasmania is not immune from such droughts, and the island state experienced some very dry years during that period.

Fortunately, this all turned around with the big wets of 2010/11 and even though we’re once again entering a relatively dry spell in some areas, trout fishing is generally thriving in Australia!

Along with the widespread revival in mainland freshwater fishing fortunes since 2010 has come a huge resurgence of interest in trout, some of it amongst a younger generation largely unfamiliar with this style of angling. This is great to see. 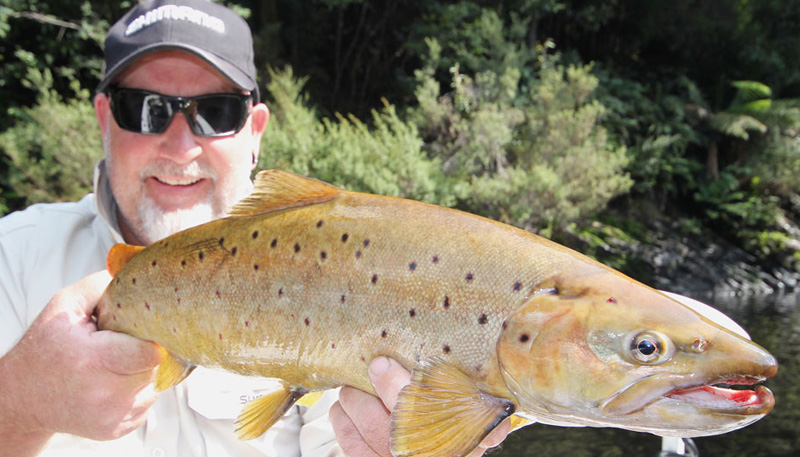 Lots of these younger recruits to the trout fishing scene cut their teeth on soft plastic fishing for bream, snapper, flathead and other saltwater species. Not surprisingly, they’re keen to try these same techniques on their new, spotted, freshwater targets.

As early as the end of the 1990s I was writing and talking about the thrills and rewards of chasing trout with soft plastics in both flowing and still waters. Sadly, just as the message was taking hold, the drought hit and trout fishing went on the back burner for many of us. Now it’s time to turn the heat up and bring it back to the boil, especially with the help of all those new, young recruits!

Truth is, the trout-on-plastics scene in Australia remains in its relative infancy and, to my way of thinking, that makes it doubly exciting. As I wrote as far back as 2004, a great deal of developmental work remains to be done before we can claim to know half as much about catching trout on Squidgies as we do about catching flathead, bream, bass and even yellowbelly and cod on these same lures. What we do know, however, is that soft plastics work extremely well on the salmonids!

One of the really neat things about this delayed development of a strong soft plastic fishery for trout in all of Australia is that almost every session on the water provides new developments and breakthroughs. This means that you and your mates can still play a major part in writing the relatively early history of soft plastic fishing for trout in Australia… How good is that? One characteristic I frequently notice about any relatively “new” fishery (and soft plastics for trout still falls into that category for many Aussie anglers) is that far too many new chums become bogged down and fixated in the “what” question and completely forget to ask about the equally important subjects of “where”, “when’, “how” and “why”. In other words, they want to know exactly what make, model, size and colour of lure the pioneers caught their fish on, then go out and slavishly follow that recipe in the hope of repeating those early successes. This is a big mistake, in my opinion, and effectively halts the evolutionary development of the fishery.

Instead of asking what lure, ask how it was presented, what time of year it was used, what the users hoped to imitate with it, and why they made those lure choices… then make your own lure choice decisions based on that information. Don’t be a follower!

Soft plastic fishing for trout is no different to chasing any other type of fish with these deadly lures. We need to either imitate a food form that’s recognisable and attractive to the fish, and/or incite their curiosity or aggression…. It’s really as simple as that.

Trout mostly eat insects (aquatic and terrestrial), crustaceans (shrimps, yabbies and the like) and small fish (including baby trout, along with gudgeons, goldfish, galaxias, smelt and whitebait). In addition, they are most likely to behave aggressively and become territorial during the pre-spawn and spawning periods, and will chase and attack smaller fish and rival suitors at such times. All of this information provides us with invaluable data when it comes to lure choices: soft or hard. Modern soft plastics like Squidgies are available to mimic all of the food sources and aggression triggers I’ve just outlined, and they can be cast, jigged or trolled, in both flowing and still waters… As I’m fond of saying: it ain’t rocket science!

Those anglers who haven’t yet thrown soft plastics at trout are in for some big surprises when they do. The biggest single step they still need to make is overcoming the mental hurdle and actually tying one of these lures on to the end of their line, then chucking it into trout-holding water… The fish will do the rest!

The tackle I use when chucking Squidgies for trout is exactly the same gear I choose for casting metal, timber or hard plastic lures at these fish (or at bream). That typically means a 1.9 to 2.2 m Shimano spinning rod with a nice light tip, a 1000 to 2500 size Shimano spinning (threadline) reel and 1 to 3 kg PowerPro braided line with a 1.5 to 2 m leader of 2 to 4 kg breaking strain Ocea fluorocarbon at the business end. This leader is connected to the main line via a Double Uni, Full Blood or Slim Beauty knot. 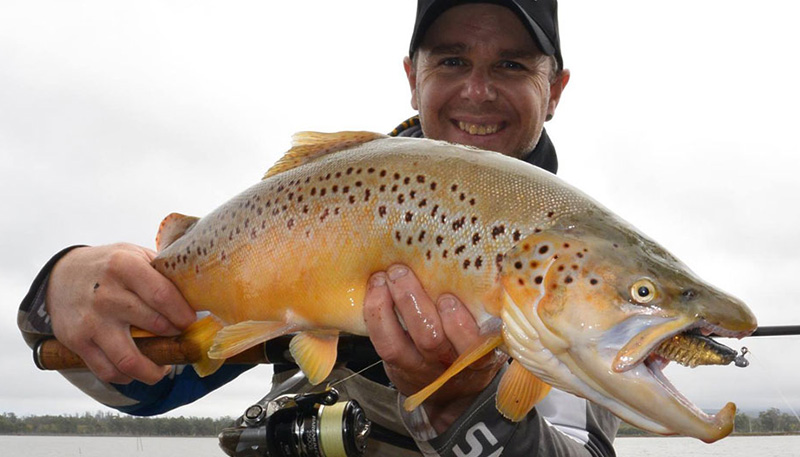 Yes, you can certainly lure fish for trout (and any other species) using a reel spooled entirely with mono, and many people still choose to go this way. However, once you’ve experienced the benefits of fine braids over mono, it’s very hard to go back! Those benefits can best be summarized as longer casting, greater strength-for-diametre, better “feel”, easier hook-sets and greater line durability.

The actual presentation strategies with plastics are exactly the same as with hard lures. In other words, throw them into the same places and do the same things with them as you would with a spinner, spoon, minnow or winged lure. Remember what I said: it ain’t rocket science!

My final message in this piece is (or should be) a loud, clear, simple one: If you still haven’t tried Squidgies on trout, make this the year that you do. For goodness sake, just get out there and give it a go… Trust me, it works!

In Part 2 of this feature we’ll look in more specific detail at how, when and where to target trout on Squidgies. Until then, Tight Lines!