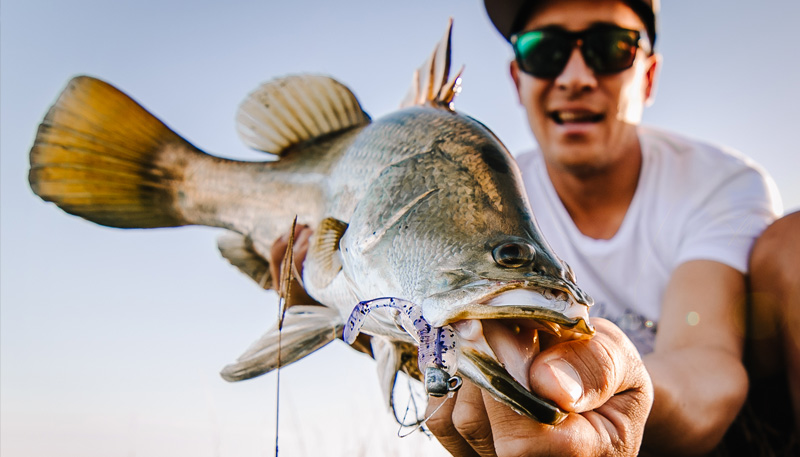 The new Squidgies Bio Tough range is without a doubt the most exciting addition to the Squidgies line-up in almost a decade!

But first, some background: Bushy and I developed the original Squidgies at the invitation of our mate, the late John Dunphy, who was then the boss of Shimano Australia. This happened around the turn of the new millennium. After more than 18 months of frenzied development, Squidgies finally hit the market with just three models (the Wriggler, Fish and Shad) in half a dozen colours and sizes, accompanied by a couple of jig head designs. The rest, as they say, is history!

At the time, and for many years after, Squidgies were the only soft plastics designed specifically to target Australian fish, and they totally dominated the local market. We also accompanied their release with a series of how-to videos and a national circuit of presentations dubbed “Squidgy Nights”. These events filled halls, clubhouses and theatres from Hobart to Darwin and Sydney to Perth. Aussie anglers were starving for info’ on how to use these newfangled plastics, and thanks to our concerted education program, combined with massive media coverage, a genuine grass-roots revolution swept the Australian angling world. Things would never be quite the same again.

A lot of water has flowed under the bridge since those heady days of the early 2000s. Eventually, Dunphy Sports sold its controlling interest in Shimano Australia to the Japanese parent company. Some time later, the contract that Bushy and I had to design, test, promote and endorse the Squidgies range also came to an end. Today, we no longer have a commercial agreement relating to the sale of Squidgies, and our names and heads don’t appear on the packs. Nor do we any longer have a role in designing new product. 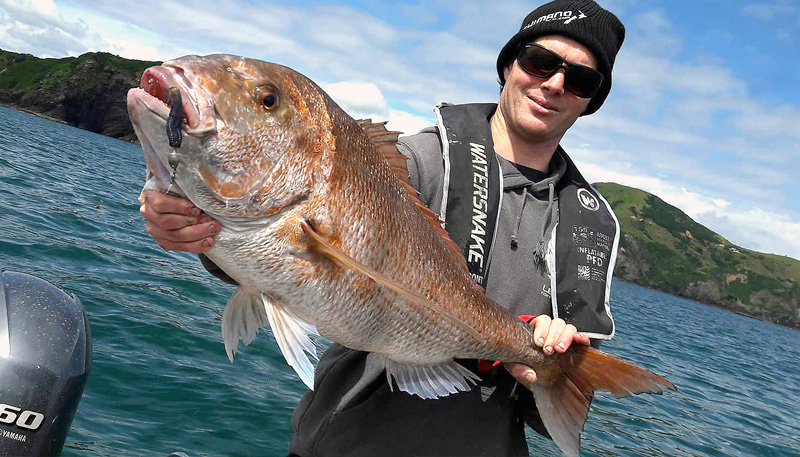 However, I’ve stayed on to do some of Shimano’s social media work, and in that role (and as part of Shimano’s Pro team), I get to test new products, including pre-production samples of the Squidgies Bio Tough range. These are designed and made in Japan, and they clearly reflect the quality and attention to detail associated with most Japanese-made lures.

The Bio Tough range marks a clear departure from traditional Squidgies, and a bold new direction for the brand. These tails are manufactured from an extremely tough “Dura Stretch” material that’s far more resistant to cutting, tearing or breaking than earlier Squidgies. This new material also meets stringent requirements for biodegradability, breaking down at a measured rate over time after being lost or discarded.

While I was immediately impressed by the obvious quality, appearance, feel and toughness of these latest Squidgies, I also quickly discovered that they’re a little trickier to rig than the originals. The elasticity of the “Dura Stretch” material means that these tails “fight” jig hooks and keepers as they’re pushed into place, and that they have a tendency to want to “crawl” off some jig heads after being rigged. 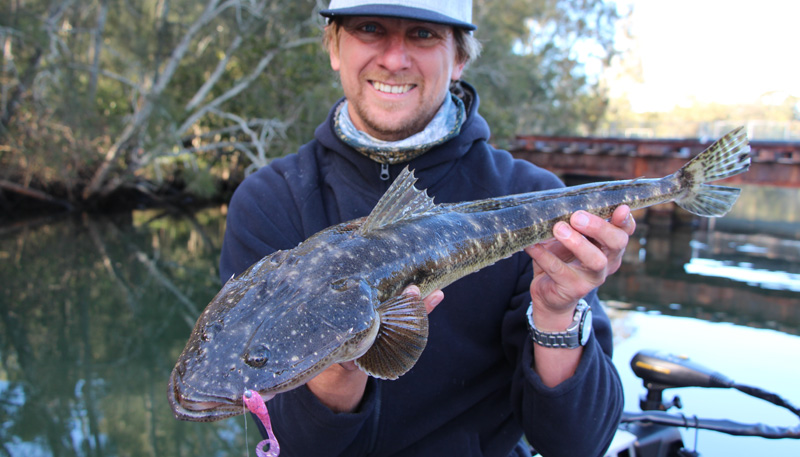 These habits are easily overcome with a little practice and persistence, but it does pay to take extra time and care in the rigging process. Luckily, straight rigging has been greatly enhanced by the inclusion of small indentations on the backs of the Bio Tough tails that act as pre-determined exit points for different sizes of hook. This is a neat touch. The other bonus is that these super tough tails can be pulled off a jig and re-rigged many times without tearing, so if you don’t get the lure dead straight first time, remove it and start over. It’s worth getting it right.

The second aspect of the “Dura Stretch” material that needs stressing is that this stuff doesn’t play well with others! Whatever you do, don’t mix these tails into tackle box compartments with traditional Squidgies, other soft plastics or hard-bodied lures. Also, don’t leave them on table tops or other furniture and don’t store them bent. In fact, the best way to keep your Bio Toughs in pristine shape is to leave them in the packaging they came in.

Tricky rigging and a propensity to melt and deform if incorrectly stored might sound like negatives, but trust me, they are very minor drawbacks when compared with the effectiveness and durability of these new Squidgies. I can honestly say that I’ve never fished with deadlier plastics! 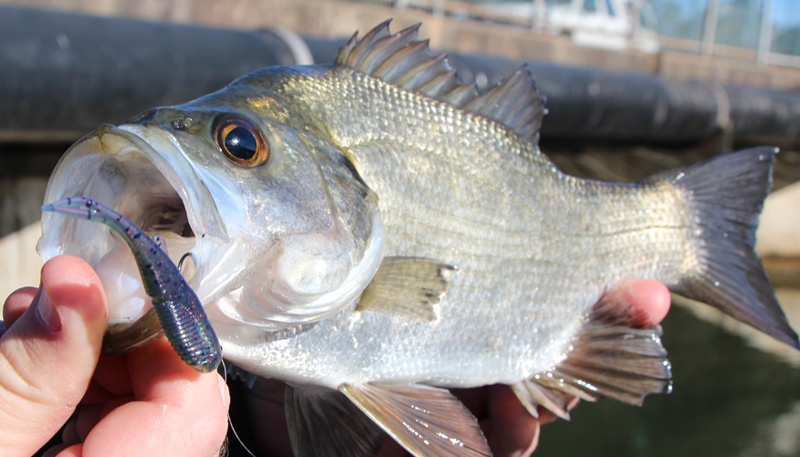 The UV-enhanced colours of the Squidgies Bio Tough range take on an incredibly life-like luminescence and transparency once in the water. This property — combined with their appealing actions and positive buoyancy (meaning that the tail tends to float above the jig head at rest) — result in hit after hit, even when the rigged tail is simply falling through the water, sitting on the bottom, or being “dead-sticked” in any current or tide. Oh, and adding a smear of S Factor simply makes a brilliant thing even better!

Frankly, I was staggered by the fish-catching powers of the Bio Tough range during my on-water testing. In my opinion, these lures mark a significant advancement in soft lure technology. It wouldn’t be stretching things (pardon the pun!) to say that they might almost be too good, and that anglers will need to exercise an increased level of restraint in order to avoid over-fishing some hard-pressured waterways. The old adage of “limit your kill, don’t kill your limit” takes on special meaning when discussing these latest Squidgies! 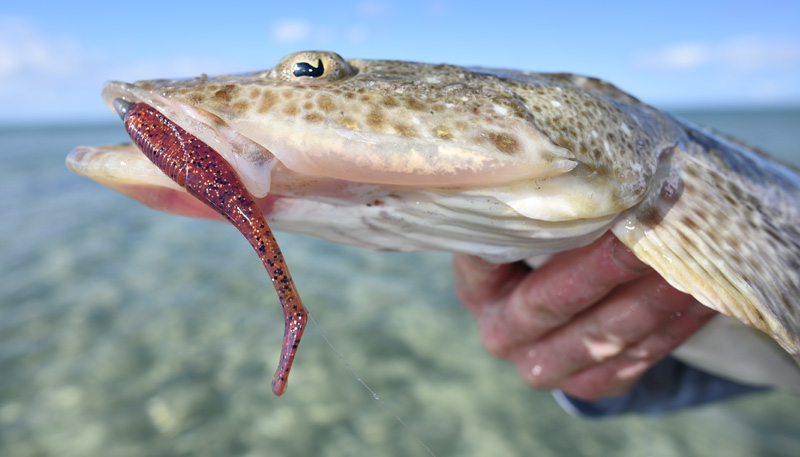 And yes, they’re tough, too. I have individual tails that have accounted for dozens of flathead and bream, along with a couple of mulloway or jewfish, all without any obvious signs of wear and tear. Sure, toothy critters such as tailor and mackerel can still slice them, but nowhere near as easily as they do other plastics, including traditional Squidgies. Where you might have expected to burn through a packet or two of Squidgies on a hot bite in the past, one Bio Tough tail should be easily up to the task, unless you snag up and lose it (and if you do, it’s reassuring to know that it will break down and degrade over time).

There will definitely still be a place for the older, traditional-style Squidgies in my tackle box well into the foreseeable future, but I am increasingly finding myself reaching for the Bio Toughs whenever I need to produce the goods in a hard-fought tournament situation, or when the TV cameras are rolling. They are quite clearly the next stage in the ongoing evolution of soft plastics, and a definite step up from what has come before.

Visit www.squidgies.com.au for more information, and to look at the entire range of Squidgies Bio Tough styles, sizes and colours.