Over the course of a year, I get to talk to a lot of soft plastics fishers from around the country. Some I meet at seminars and shows. Others I chat with via the various pages on Facebook that I run or help to administer (especially the StarloFishing, Fishingscool and Squidgy Soft Plastics pages), or through my blogs here at www.starlofishing.meStill others send their letters or emails to me via the magazines I write for. However, no matter what the source of the enquiry, one question (or variations of it) dominates the calls for advice that I receive. Typically, that query begins with the words: “What’s the best soft plastic for…?”

I can’t help but smile at the geographic specificity of these well-meaning questions. Anglers clearly have their favourite fishing spots and they seem to expect that the fish they chase in these beloved haunts will behave just a little differently to those living down the road, around the bend or across the border. Generally speaking, this is not the case. I’ve caught redfin perch in the New England rivers of north western NSW, and also in the very “old England” rivers around the historical university city of Cambridge, in Great Britain (where they’re simply known as perch). Rather unsurprisingly, these fish looked the same, behaved in a similar manner and happily ate identical lures in both locations, literally a world apart Rather than asking me (or someone else) to nominate the best softie for catching trout in Tasmania’s Arthurs Lake, an angler would be far better off seeking advice and opinion regarding the optimum approaches for targeting wild brown trout in relatively shallow, fertile lakes with fairly clear water and lots of healthy weed beds. That way, the answers they received would be applicable across a whole range of waterways featuring similar target species and conditions.

The message I’m trying to get across to you as we begin this examination of the process of picking plastics is a fairly simple one: Fish are fish, and a particular species will behave in a very similar way when presented with a particular habitat type, season, degree of water clarity and set of food sources, regardless of the precise geographic location. This is a great thing to know, because it means that once we sort out some effective guidelines for one place and time, we can apply them in the future whenever we encounter similar conditions, even if we’re a long, long way from home. That’s a useful lesson to learn.

It still surprises me how daunted some anglers are by the thought of making that initial choice, tying on that first lure and actually beginning to fish. It seems that some folks are genuinely freaked out by the entire process! They open their tackle box at the water’s edge, scan its contents with a confused, worried expression, sit in a silent agony of tangled indecision for several minutes, then turn desperately to look for someone to direct their burning question to: “What should I use?”

For goodness sake, if you truly have absolutely no idea where to start, then take the plunge and make a guess! Tie something on, give it a swim and see if the fish show any interest at all in it. If they don’t, then change your lure and try again.

In truth, your approach rarely needs to be quite that experimental. You should at least have an idea of what lives in the waterway and what some of the most important food sources are likely to be. This basic knowledge is a big help in fine tuning your initial selection. If it’s a stocked barra dam renowned for producing metre-plus bruisers and boiling with hand-sized bony bream, it doesn’t make a lot of sense to kick off with a 5 cm worm or grub imitation! Conversely, if it’s a gin clear alpine trout stream with a good population of aquatic insect nymphs, it will most likely be counterproductive to tie on a 15 cm fish-shaped swim-bait!

Engage your basic common sense and begin by pruning down at least the size selection process. If you’re chasing big fish that you suspect are eating big things, then choose a biggish lure. If you’re after smaller fish that you think are eating tiny food, pick a little lure… It’s not rocket science! While you’re at it, at least have a think about roughly matching the shape, colour and swimming action of those likely food items. Fly fishers call this thought process “matching the hatch” and it’s one of the most important steps in successful lure selection.

Be willing, however, to accept that you might be wrong… It happens! Just occasionally those big barra, surrounded by all of those chunky bony bream and beefy mullet, might actually be dining on a prolific year class of juvenile rainbow fish half the size of your little finger. Or the larger trout in that high country stream may actually be cannibalising their smaller cousins. That’s okay. You’ll find this out when they ignore your first choice!

What I’m trying to tell you is that nothing and no one can give you better feedback on your lure choices than the fish themselves. Let them tell you what they want and, when they do, make damn sure you’re listening!

In my opinion, far too many anglers expend far too much time and energy agonizing over the lure colour issue. Yes, sometimes it’s important. Occasionally it’s absolutely critical. But I’ll let you in on a little secret: Most of the time the actual colour of your lure is far, far less important than its size, action and running depth. And that’s exactly where I usually rate colour in the lure selection process… Behind size, action and running depth. Yet I’m so rarely asked “what’s the best depth to target this fish at?” or “what sort of speed and lure action do they like?”. Instead, most anglers seem to believe that if they’re told the magic colour to use, success will instantly be theirs. If only fishing were really so simple!

Once again, matching the hatch is a very good place to start. If the mudeyes (drangonfly nymphs) crawling up your wader legs in a trout lake are all olive green, then try using an olive green lure. If the most common smaller fish (and therefore the likely food source) in a Murray codriver are redfin, try a greenish lure with some red highlights… Remember what I said before about rocket science? 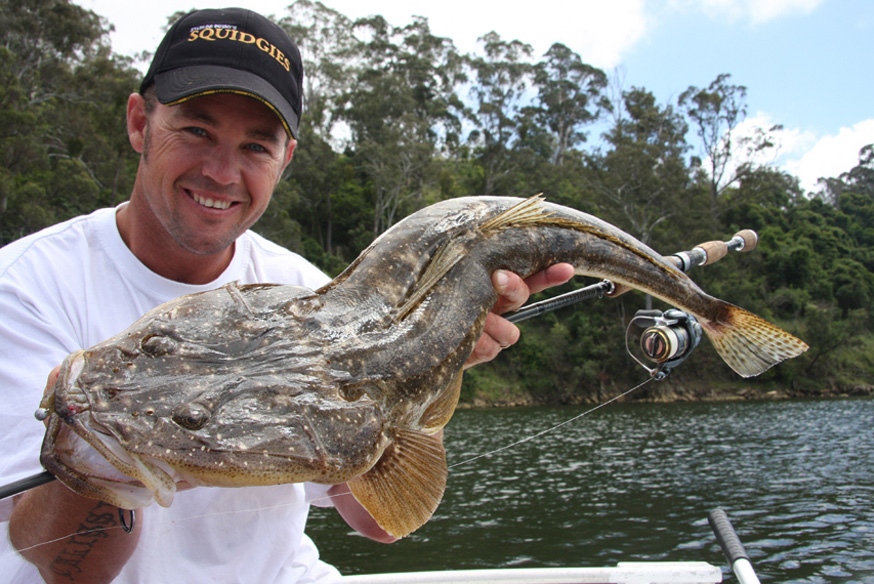 If no obvious food sources are present and you’re not sure what the fish are actually eating, look at the water itself. Is it clear or dirty? And if it’s somewhere in between those extremes, is it green-tinged, brownish or tannin-stained? Whatever it is, the little critters living in it are likely to be wearing a roughly similar hue. So if it’s greenish, go for a green lure. If it’s tea-like, choose a red or brown plastic. Again, this is just a starting point. The tick of approval (or otherwise) will come from the true experts on this issue: the fish themselves. In other words, if your first choice draws a blank, try something else.

As a final word on colour selection, there’s a rule of thumb I’ve used for many years that usually stands me in pretty good stead. It goes something like this: If the water is gin clear, use subdued, natural tones. If it’s a bit dirtier, use something a little brighter. If it’s very discoloured, go for vivid, fluorescent tones. If it’s absolutely filthy, try black or purple… or bait… or go home! And finally, if you’re mate’s catching fish and you’re not, use exactly what he’s using!

I’ve used the expression “it’s not rocket science” several times in this discussion of the lure choice process. But in closing, I’ve got a little admission to make… Consistently successful lure selection can be both a lot simpler and also a lot more complex than rocket science!

Let’s face it, a rocket is a tube full of propellant fuel, ideally with some stabilizing fins. If you point it heavenward and ignite the fuel, it should fly. So maybe rocket science isn’t really so complicated after all. On the other hand, fish can be incredibly fickle critters. Their “moods” (for want of a better and less anthropomorphic term) constantly change, as does their behaviour and their choice of food. Sometimes they simply stop feeding altogether for lengthy periods (perhaps a lot of the time, for things like impoundment barra or big Murray cod). When they do, the smartest lure choices in the world may still leave you with a limp line and a straight rod. After all, if we were always successful, this wonderful game of ours would be called “catching”, not “fishing”, and I’d wager that we’d soon grow bored with it.

So, don’t be afraid of the lure selection process. Take the bull by the horns or the rocket by the fins and have a go. Start by narrowing the parameters of size, depth, action and colour (in that order) and making some educated guesses, then test your hypotheses. Sometimes you’ll find the right answer. Sometimes you won’t. And sometimes there is no right answer… That’s fishing!