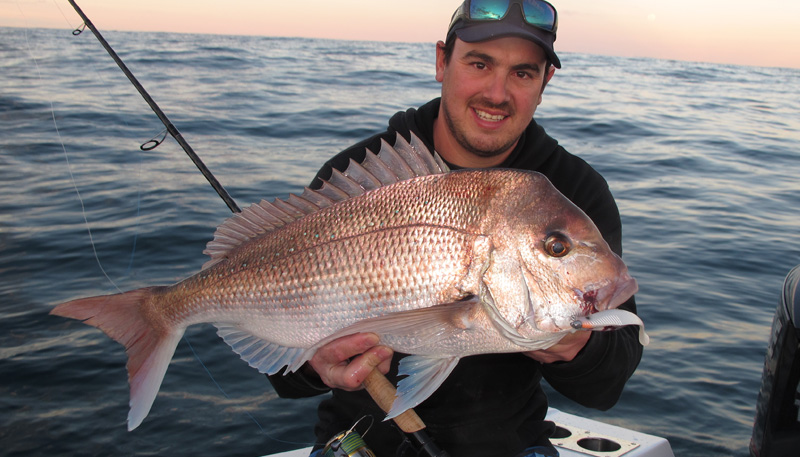 In case you’ve missed the news, here it is: Snapper are not only eminently catch-able on Squidgies, the fact is that in many situations, Squidgies are capable of matching or even exceeding the results achieved using natural baits. More significantly, lures like Squidgies often tend to produce a larger class of reds than baits and, most important of all, catching snapper on plastics is damn good fun!

Getting into reds on rubber isn’t hard, either. It works from the backs of shallow bays to the deep reefs and gravel patches well beyond the 100 metre depth contour. You can do it anchored or while drifting, with or without the assistance of berley, during the day or at night, in winter, spring, summer or autumn… in fact, anywhere and any time that snapper are available and able to be caught on bait you can catch ’em on Squidgies!

Gear choices depend on water depth, terrain and the likely size range of the fish you’ll be encountering. Across the board, the most popular choice is a reasonably light double-handed spinning (threadline) outfit based around a 2 to 2.2 m fast-taper spin stick and a 2500 to 6000 size Shimano threadline reel full of 4 to 12 kg gel-spun line (we recommend PowerPro). Longish leaders (2 – 5 m) of nylon or fluorocarbon with a rated test strength between  6 and 15 kg are preferred, and it’s pretty hard to go past Ocea FC for this task. On the other hand, some anglers prefer heavy baitcaster or light to medium overhead tackle, especially where reds over 6 or 7 kg are commonly encountered. It’s largely a personal choice.

With this type of outfit (threadline or overhead) it’s possible to cast lures and work them back to the boat, or to fish your Squidgies down a berley trail. One particularly effective trick is to make a reasonably long cast down-current, let out a bit of extra line, close the bail arm or put the reel into gear and drop the outfit in a rod holder to let the plastic sink through the berley trail on a reasonably tight line. The natural motion of the boat lifting and falling in any swell is transferred through the rod and line and is enough to add some life to the lure and trigger savage strikes. Mostly, the fish just hook themselves, and kingfish, trevally, amberjack, cobia and the like also turn up frequently, in addition to reds. If the current is too strong, cast up-current to allow the jig head and plastic to sink as it comes back towards the boat. Ideally, try both approaches to discover what’s working best on the day. 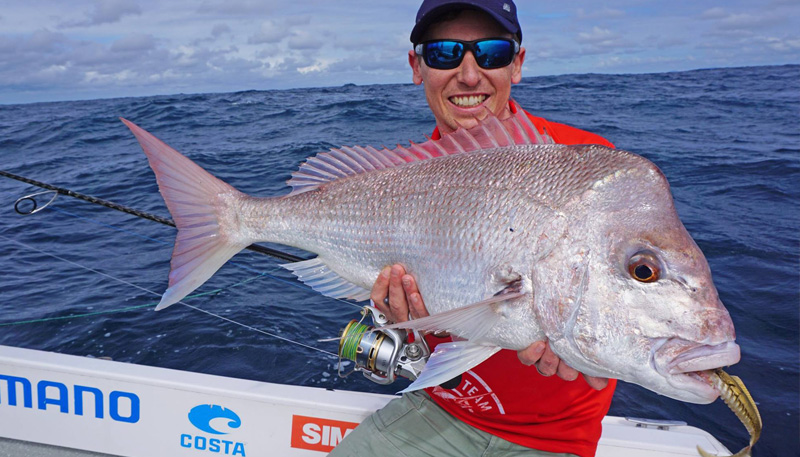 When drifting, try casting ahead (down-drift) of the boat and also simply spooling your Squidgies straight over the side and allowing them to sink. Both strategies work.

When it comes to the lures themselves, head weight and hook size are obviously dictated to a large extent by water depth (and fish size), but if there’s a ‘standard’ snapper offering, it’s an 80 to 120 mm soft stick-bait style plastic like one of our Flick Baits or Whip Baits on a 15 to 40 gram lead-head jig armed with a 2/0 to 6/0 hook. Thankfully, there’s plenty of choice on offer in this style of jig head hardware on the Australian market today, in stark contrast to the situation less than a decade ago.

But don’t just stick to our straight-bodied Flick and Whip Baits. Squidgies curly-tailed Wrigglers, Pro Prawns and Fish all work really well, and models from the new Squidgies Bio Tough range are smashing the snapper!

The biggest secret is simply to get out there and give it a go. Start chucking or dropping Squidgies of the sort just described in places where you regularly catch reds on bait and, trust me, you will catch snapper on them! It’s not rocket science. Conversely, if there are no catch-able snapper there, you won’t catch any, regardless of what’s on your hook. So don’t give up after one blank session.

Trust me, the first time you feel that urgent tug on your line and load up against a head-bumping, hard-surging adversary while bouncing Squidgies over your favourite snapper patch it will be something of a revelation, and I guarantee it’ll put a smile on your dial!