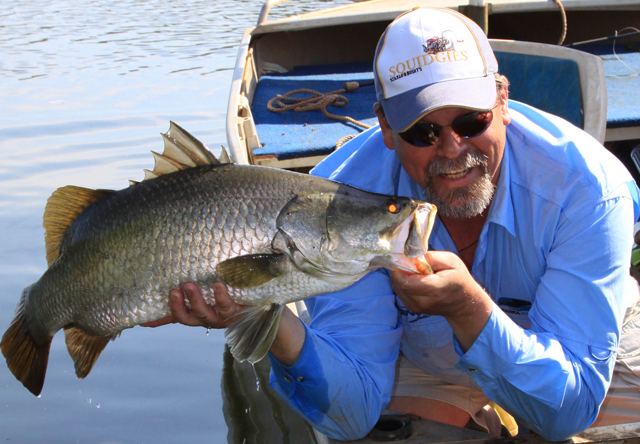 Bream fishing for barra… It’s a term I’ve found myself using more and more since my three-year stint living in Darwin. It reflects a significant shift in the approach that an increasing number of northern anglers now adopt when chasing the iconic barramundi, especially in reasonably clear, shallow waters; both salt and fresh.

Traditionally, barra fishing has been a relatively heavy-handed affair, dominated by gutsy baitcaster outfits, strong lines, thick mono leaders (or even wire traces) and chunky lures. For decades, this was a perfectly understandable response to a fishery that really didn’t seem to demand a lot of sophistication or subtlety. Barra were regarded as willing customers and generally rather un-fussy feeders. Furthermore, their physiology is undeniably hard on light tackle. Equipped with bear-trap mouths and razor sharp gill cutters, barra are justifiably renowned as hook and leader destroyers. They also hang out in bad country full of snags, mangrove roots, oyster rocks and weed beds. Why risk losing a trophy fish by going finer and lighter with your gear when these fish will happily smack big lures strung on thick leaders?

Loading for bear always seemed a logical response to barra fishing’s myriad challenges, even if the “average” specimen encountered in most wild fisheries were cubs in the 50 to 70 centimetre range. That long-waited-for metre-plus bruiser was only ever another lucky cast or troll run away. Scale down your gear for the “average” fish and chances are you’d blow your shot at landing the big girl when she finally came along. It just isn’t worth the risk… Or is it? 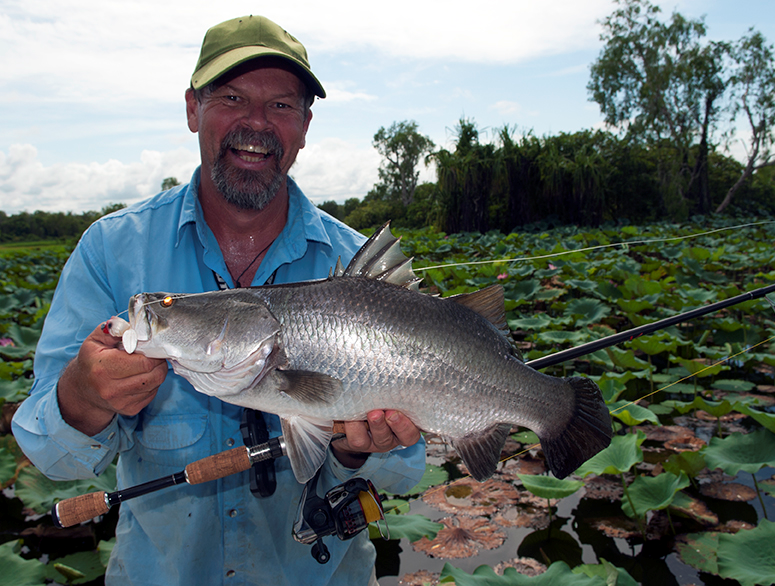 Gradually, those entrenched ideas about barra tackle and tactics are being broken down, or at least eroded. Stocked impoundment fisheries in Queensland proved once and for all that barra can become just as gun-shy of boats, noise, people and intensive fishing pressure as any other species… perhaps even more than most. Dam fishers have been increasingly forced to walk the fine, fine line between finesse and muscle in order to go on regularly catching acceptable numbers of stocked barra. Even then, it can be tough.

This phenomenon of diminishing returns isn’t confined to our dams. Wild barra fisheries are also copping much higher levels of intelligent angling pressure these days. That’s especially true close to large population centres like Gladstone, Rockhampton, Mackay, Townsville, Cairns, Darwin and Broome. Waterways lying literally in the shadow of these tropical cities still produce some great barra fishing, but only for a relatively small handful of switched-on specialists. Across the board, from east to west, these consistently successful guys and girls are being forced to incorporate higher and higher levels of sophistication into their approaches. Increasingly, they are borrowing finesse tactics honed further south on species such as bass and bream and applying them to their beloved barra… Often with spectacular results!

Few major bodies of water provide a better example of this hothouse incubation of southern-spawned finesse fishing concepts than Darwin’s vast harbour. Netting bans over the past decade or so have actually resulted in improved barra and salmon stocks inside the harbour, but this has been more than counteracted by a sky-rocketing urban population, amazing levels of boat ownership and the fact that every second resident of the Top End’s capital city fancies themselves as a barra fisher. In short, the harbour cops a fair old flogging these days. 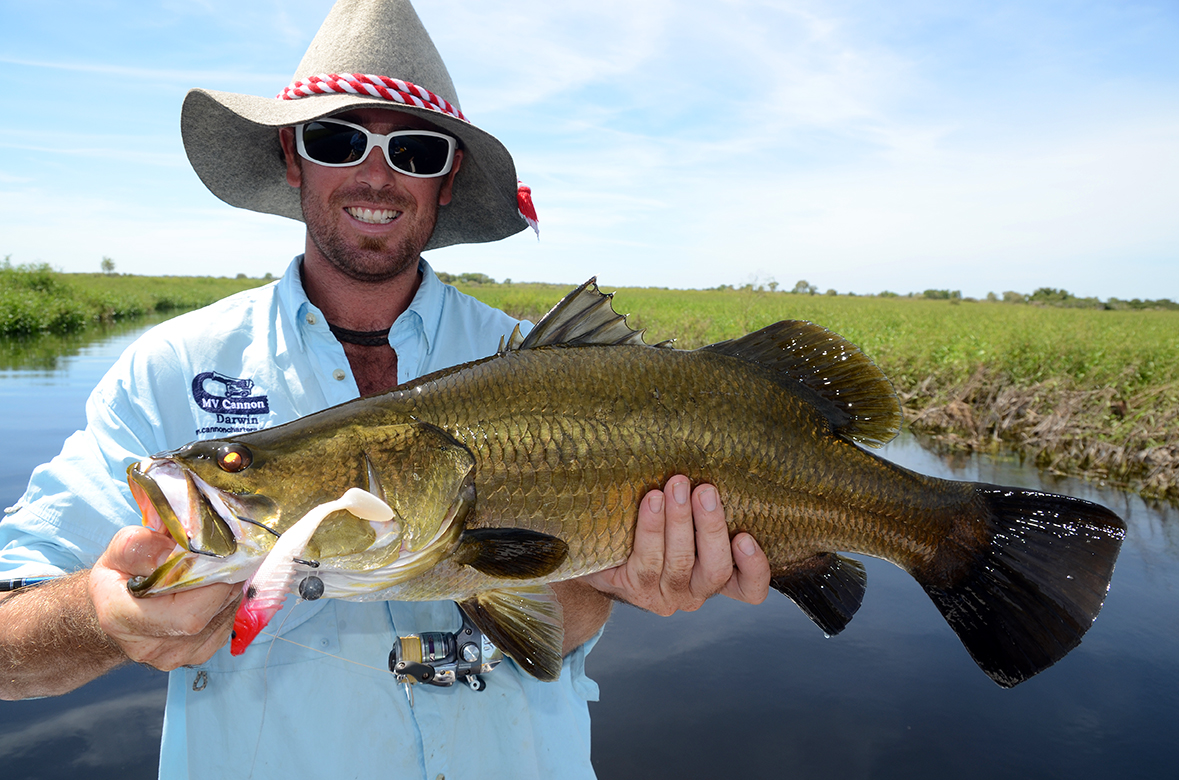 Darwin Harbour’s barramundi fishery is dominated by clean, silvery male fish in the 40 to 75 or 80 centimetre range. Some of the best of this barra fishing occurs over shallow flats and around creek and gutter mouths, especially during the last half of the ebbing run-out tide and the first hour or so of the newly making flood. Prime times of the lunar cycle are when neaps begin building towards springs. Late September, October and November are red letter months, but barra can be found in the harbour at any stage of the tidal cycle and on every single day of the year. However, finding them and catching them can be two entirely different matters. Darwin Harbour salties are notoriously flighty and fickle fish by barra standards. For this reason, only a relative handful of keen and dedicated specialists can truly hang their hats on the harbour barra fishery and expect consistent, year-round results.

This movement is spearheaded by a group of anglers I’ve increasingly come to refer to as the “harbour masters”. They catch plenty of fickle Darwin Harbour barra, and they also share a philosophy of regularly going smaller, lighter and more cunning with their lures, lines, leaders and tackle. Their primary weapons of choice are what they call “noodle rods”; light single-handed flick sticks that would be perfectly at home down south chasing big bream in the oyster racks or bass around snags. They pair these whippy, two metre-plus rods with 1000 to 3000 size spinning reels filled with fine diametre two to six kilo braid and then attach rod-length leaders of 10 to 20 kilo fluorocarbon. Favoured lures are small, lightly-weighted soft plastics and six to nine centimetre hard bodies; again, it’s hardware that wouldn’t be especially out of place in a southern bream or bass tournament.

Do these guys catch barra? You bet they do! It’s not unusual for them to pin anywhere from one to six fish in a half day session and occasionally they’ll nail two or three times that many for the day. A couple to a dozen barra averaging 60 centimetres or so in length is nothing to be scoffed at, especially when the action takes place within sight of the Territory’s parliament house and Darwin’s thriving central business district. Even skilled live baiters have trouble keeping up with those sorts of scores, at least close to town and in daylight hours. The by-catch when breaming for barra can be worthwhile, too. Big tarpon (ox-eye herring), pan-sized golden snapper (fingermark), pikey bream, blue and threadfin salmon, estuary cod, the odd mangrove jack and various trevally, queenfish, school mackerel and barracuda are all on the cards when bream fishing for barra in the harbour. This kind of variety can make for a fun day. There’s no question in my mind that these light tackle harbour masters catch more barra in Darwin Harbour, and do so with greater regularity, than anglers using more traditional lure fishing approaches and heavier tackle. Adopting their methods has greatly increased my own results when fishing on this sometimes-trying urban waterway. Never was this more noticeable than in March and April this year, when the harbour’s barra, tarpon and salmon became totally fixated by the millions of tiny jelly prawns seething and flicking in every snake drain and gutter mouth. Towards the bottom of the tide, fish were often boofing everywhere, but casting a “standard” barra lure was little more than an exercise in frustration, and the live baiters were generally faring no better. However by switching to a Squidgy Bug soft plastic strung on a diminutive one gram Finesse Darter jig head fitted with a small but strong No. 4 hook, I was finally able to turn my fortunes around. The trick lay in making a fast cast just beyond the boil of a recent boof, then holding the rod tip high and cranking the spin reel at a steady medium pace to keep the lure in the top 30 centimetres of the water column. Hits were violent and fighting feisty 50 to 70 centimetre saltwater barra on bream gear in relatively open water is about as much fun as you can have!

I can hear the questions now: “Okay, so it works in Darwin Harbour on 50 to 70 centimetre barra, but what about in other places? And what happens when a big girl jumps on that noodle gear?”

The last few dry seasons have been tough ones for barra fishers in the freshwater of the Top End’s iconic Corroboree Billabong. Catch rates were low using all of the proven techniques and by August and September, even the gun guides were struggling to find their clients a couple of hook-ups a day. Interestingly, by down-sizing our tackle and giving our soft plastics the Jenny Craig weight loss treatment with a pair of scissors, we were able to go on taking anywhere between four and eight nice barra a day, along with a similar number of saratoga and a smattering of incidentals such as tarpon, sleepy cod, mouth almighty, long toms and the inevitable “powertails” (catfish). This might not sound like brilliant fishing, but trust me when I tell you that we were doing significantly better than almost anyone else on the water at the time, simply by using our bream gear and trimmed-down rubbers. It’s a story I’m hearing more and more often, from Bowen to Broome and beyond. Sure, when a bigger barra joins the party, you can find yourself seriously under-gunned and in a world of trouble on this sort of finesse gear. That’s the price you pay and the risk you take. Sometimes you’ll land the bigger fish (especially in open water), sometimes you won’t. There are never any guarantees in fishing. There are also plenty of parallels with southern bream anglers who suddenly find themselves connected to 90 centimetre dusky flathead or metre-long mulloway on their flimsy flick sticks and wispy leaders. A surprising number of those trophies end up getting landed by cool-headed fishers, but plenty also win their freedom. North and south, the question is this; do you always go out loaded for bear and accept that you’ll hook far fewer “average” fish as a result, or do you scale down your gear, experience a lot more action and accept an increased risk of losing those exceptional specimens that occasionally come along? Only you can answer that one.

Personally, I’ve always subscribed to the theory that you’ve got to get them on before you can get them out… And you will definitely end up with more fish on the end of your line if you lighten up a little!